What's So Special About Stopping In Idaho? 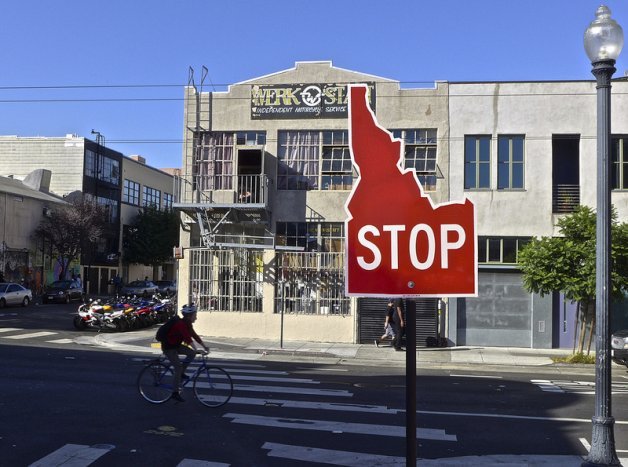 Idaho, the 43rd US state. Home to the world's very first ski-chair lift and the USA's most progressive bicycle stop law, known everywhere else simply as the Idaho stop.

Awesome. On the books since 1982, the law allows cyclists at stop signs and red lights to behave like... well like cyclists.

Stop Signs: Cyclists slow down and then proceed, when safe and fair, without necessarily coming to a complete stop. They yield, also known as a rolling stop.

Red Lights: Cyclists must come to a full stop first, but if continuing left or straight may proceed through the red light when the intersection is clear. If turning right, cyclists only yield, similar to a stop sign.

This idea is safe, simple, and beneficial for riders and drivers alike. It respects the conservation of momentum of cyclists, and standardizes behavior making riders more predictable to drivers.

So why don't cycle loving places like San Francisco and Portland, OR adopt the Idaho Stop?

The answer lies in the name. It's not called the Boise, ID Stop, or the Warm River, ID Stop (population 3) for a reason. In many states (CA included) cities can't make traffic laws that preempt state laws, and while San Francisco has organized and vocal bicycle advocacy, California is a big place with a lot of cars.

A few cities and counties in Colorado have successfully implemented the rolling stop, while Oregon and Montana have both tried and failed to push this idea into law. So for the time being, roll with caution. You may get Idaho's potato export, but you're not likely to get their stop law any time soon.

And what about the enigmatic European roundabout which could circumvent (get it?) this whole conversation? Is it a better system than the four way stop? Well, it depends on who you ask.