Back in early December a Mission Bicycle was left leaning - but not locked - against a bike rack for "just a second." Not surprisingly, it was stolen. It was one of those tiny lapses in judgement that lead to over sized regret. We're thrilled to say, thanks to strangers and the SFPD, the bike is back home where it belongs. It went down like this: 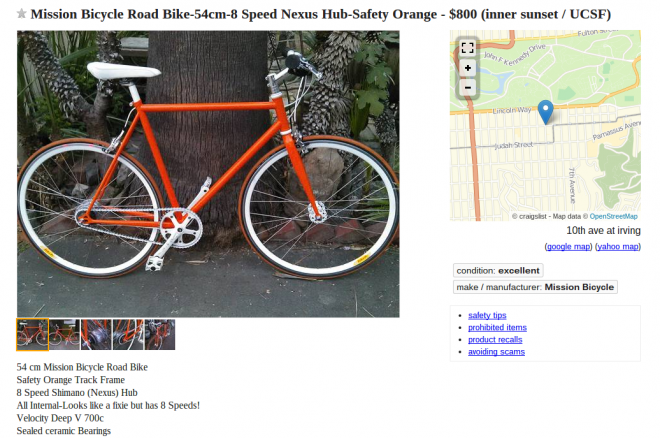 1:49 a.m. Mina sees a suspicious Craigslist post and throws up a flag to @stolenbikessfo. Mina does this because she's friggin' awesome. It's not her bike, she's just helping.

9:02 a.m. Our friend Bryan who helps run Bike Index (and its associated twitter @stolenbikessfo) responds to Mina and then shoots us an email. The bike was registered with Bike Index so it was easy to track. Moral: register your bike. 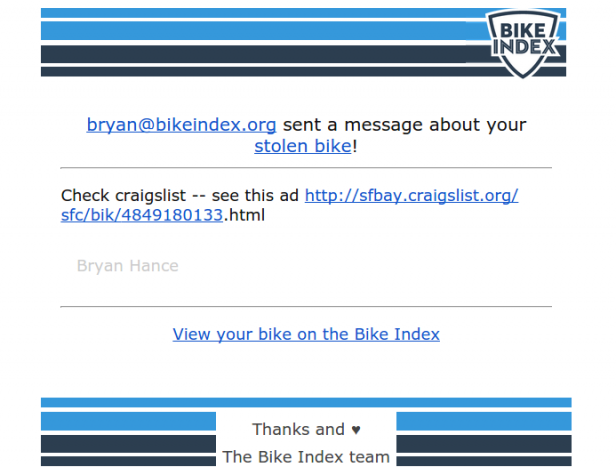 11:56 a.m. We email the seller as an interested buyer and set up a meeting to see the bike.

12:59 p.m. Cops arrive at the meet up location and post up around the corner.

1:09 p.m. Shawn-Paul arrives with the bike and within seconds the SFPD make it a party and recover the bike.

And that people, is how it gets done. And if you're not sure what IT is, read this: Oversimplified Guide to Bike Registration. Don't have time to read that?

TL;DR Trust the network of cyclists around you to help with recovery by giving them the tools they need (photos of the bike, description, registration record, etc).

This bike was recovered because:

The guy who had our bike has two other bike listings on Craigslist. We are not making any accusations of theft or guilt, but if you're missing a Rampar 10-speed or Raleigh Revenio take a look.