Retracing The Mail Route of 1894

Last summer we shared this story:

120 years ago a nationwide rail strike involving 250,000 union members, President Grover Cleveland, and the U.S. Army severed mail communication between San Francisco and its neighbors to the east. That was until an “enterprising citizen” of Fresno organised a team of 8 bike messengers to ride in stages, to do what the rail car wouldn’t, and deliver mail. The cost was a $0.25 stamp.

The weekend before last, 8 enterprising friends set out to ride the same historical route, but they didn’t divide the length up into stages. They each rode the entire 210 miles. In one day. Well, almost. Read on. 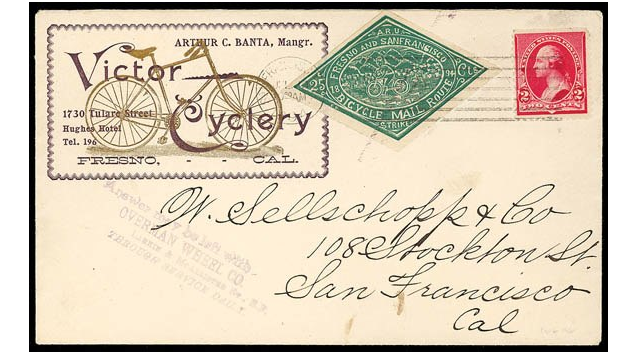 Click here to read the full 1894 story, or continue for the re-enactment. 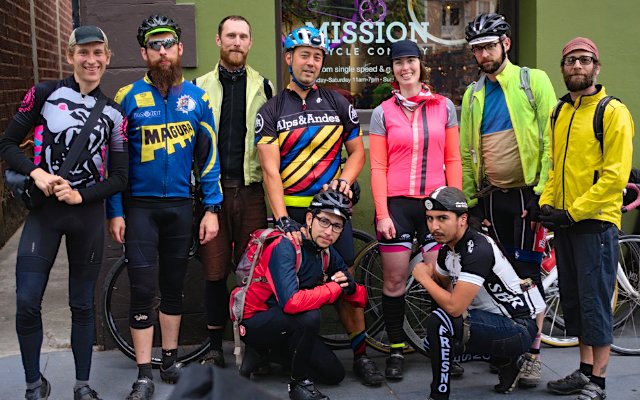 Just as in 1894, 8 riders were set to make the trek. For most, this would be the longest they had ever pedaled. “We’re all strong riders,” said Frankie, “but there’s a real difference between 100 miles and 200 miles. Your legs don’t hurt, they’re just heavy and weak. There’s nothing left. It’s a really interesting feeling.” 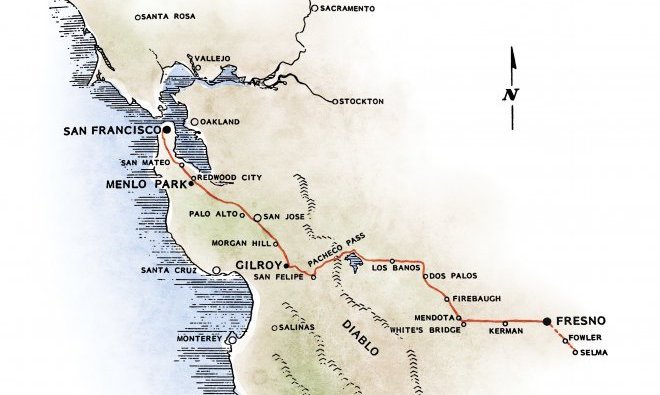 Spirits were high and the group tight throughout the first leg. Around midnight, as they neared the outskirts of San Jose, only 50 miles in, it started to rain. They pulled into a gas station to get properly suited and received the first of two warnings not to attempt Pacheco Pass at night, in the rain. 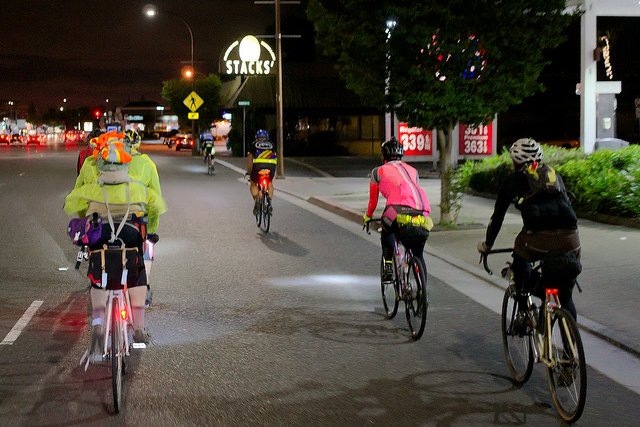 As the group continued South they drifted apart against a strong headwind and increasing rain. Morgan and Patrick made a pit-stop to wait for the others and got a phone call. “It was Robert who said, ‘Jonathan blew a flat, we’re going to get a hotel room.’ “

Patrick continued: “The crew assembled at a Safeway. Robert began the search for a room as Morgan and I kept searching for calories. We opened up the thought of carrying on to the group. Adam, Jonathan, and Frankie all wanted to press on into the night. Ben, Alan, and Robert would stay behind. The five of us reloaded our bikes, said adios to the other three and pushed on into the darkness.” 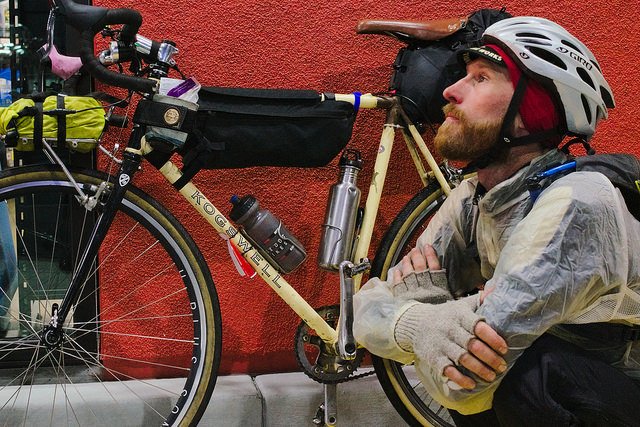 And so around mile 77 the crew split into two.

The toughest stretch of road came next. Pacheco Pass is a state highway and mountain pass that connects the Central Valley with the coastal communities. It grows from two lanes and a sliver of a shoulder, to four lanes with a wide shoulder. All the while, it climbs. This is the stretch that a stranger and a California Highway Patrol officer recommended they do not ride. Here’s Patrick:

“The wind was driving as we entered the main climb. We broke apart and climbed at our own pace, agreeing to meet at the top. The clock was pushing closer and closer to sunrise. As I ascended the sky brightened. By the time I reached the top I could see the rolling hills that surrounded this ugly mean highway.” 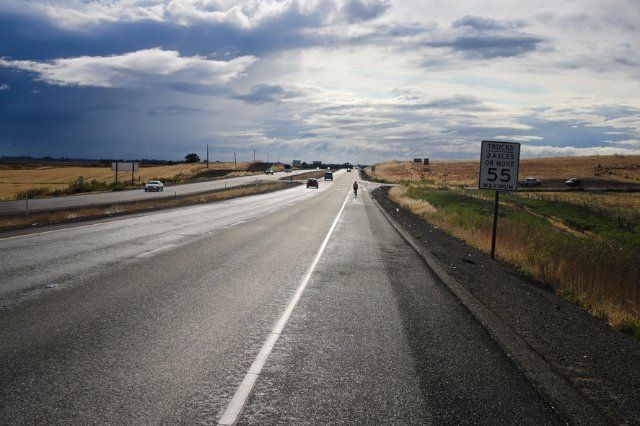 The Saturday 5 conquered the pass, despite a flat tire, rumble strips, road debris, darkness and rain. After 130 miles they stopped for a long breakfast and rest.

Fatigue and a lingering knee issue forced Ben, Alan, and Robert to get a room on Friday night. “We ride together a lot, and suffering through miles is a rhythm we know well and can help each other through,” Robert said.

They returned to the road Saturday to tackle Pacheco Pass and complete the route to Fresno. The rain had stopped, and daylight had the obvious effect of improving visibility, including the many rattlesnakes - both dead and alive - along the hot blacktop. They made it up and over without incident.

Then, there was an incident.

Rural gravel roads were a welcome change after the highway, but also brought flat tires and slow leaks. At that point it was a race against time to catch the last train out of Fresno. Here’s Patrick:

“We organized to a killer paceline… and rocketed toward the finish. One more flat, one more break. At 4:45pm we crossed the Fresno city line. With only an hour to make the train we split up and assigned tasks; Morgan grabbed train tickets, Adam and Jonathan grabbed tacos, Frankie grabbed McDonalds, and I grabbed beer. We stuffed our faces at the station, handed off our bikes, and after nearly 24 hours, nine flats, awful highways, and worse weather, we successfully followed the 1894 messenger route.” 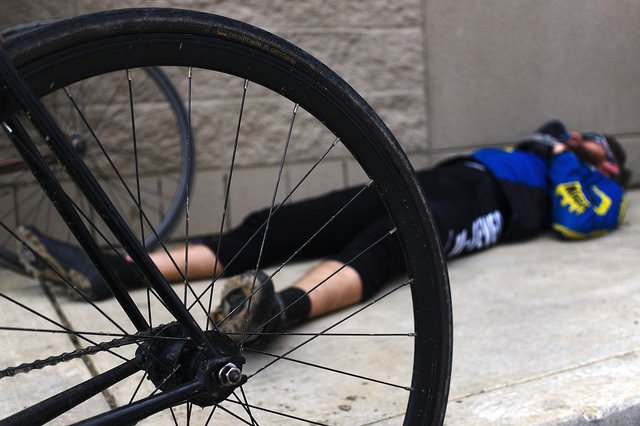 Those same gravel roads were the setting for the aforementioned incident. While goofing around spraying dirt with skids, Robert slid out and crashed. He bloodied up his leg but it was nothing major. What was major, was his busted rear derailleur.

Robert managed to doctor the derailleur with a bungee cord and get two gears working. As if the remaining 65 miles weren’t enough of a challenge, he was now down to only two gears.

It’s gotta be said these riders had fun. After a long and wet night, followed by an itinerary covering 140 miles, they still found time to be present and goof off. 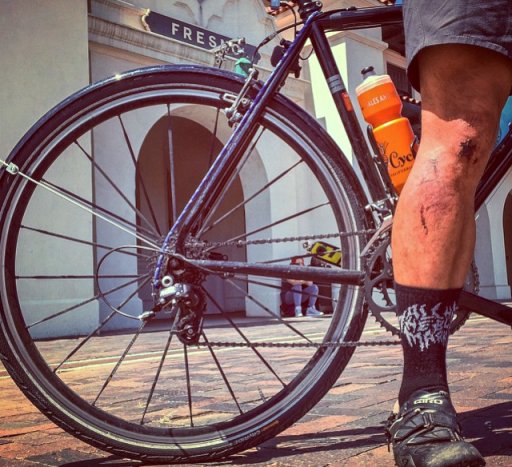 The Sunday 3 rolled into Fresno on Sunday at 1am, crashed with a friend, and made the train ride home in the afternoon. A fitting end to a journey whose origin lies in those old heavy tracks, and in the trains that for a while, weren’t running at all. 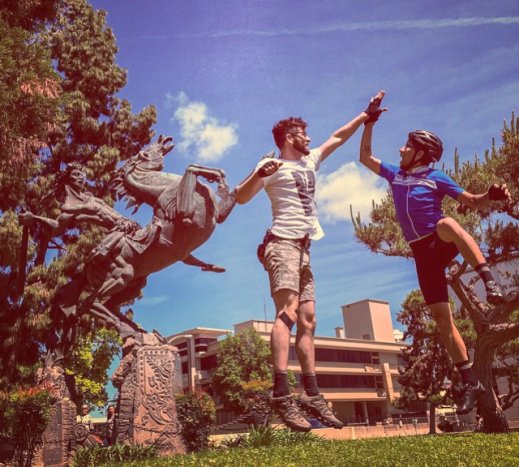 In 1894 the SF to Fresno bike messenger service charged $0.25 for the required route stamp. A stamp we’ve re-created as a sticker and embroidered patch.

However, all letters were delivered to a contracted bike shop, then to the local mailman, since by law only the Post Office was allowed to charge for home delivery.

In 2015 all 8 riders left San Francisco with a piece of mail, and in keeping with tradition, delivered that mail to the Postal Service in Fresno. 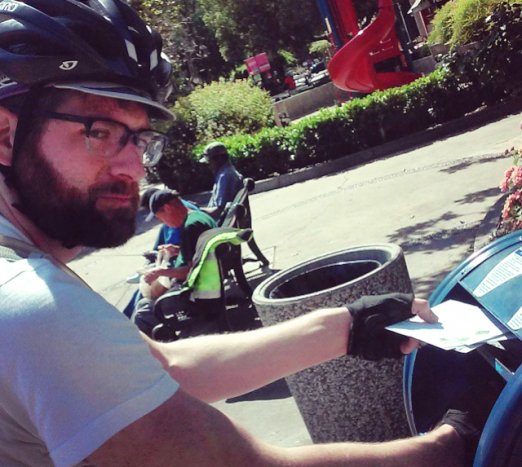 Photo by Alan Barbaran
Thanks to all the riders for sharing their story, and for being inspired in the first place by our original coverage of this snippet of local history. Specifically, thanks to Frankie, Patrick, and Robert for their contributions.