February 14, 2020
The end of an era, and a new beginning for Mission Bicycle Company

We have some important news to share with everyone.

First, we would like to thank our thousands of customers for your belief in us. Over the last 10 years all our efforts were driven by one mission: to help everyone fall in love with cycling by building the most personal, reliable and remarkable city bicycles available. There are far easier paths in life than building a boutique bicycle manufacturing company in San Francisco, yet this is the route we chose. Our connection with all of you has been our touchstone throughout this journey, and we are endlessly proud to see our bicycles out on the streets of San Francisco.

The December 2019 fire in our workshop at 766 Valencia Street was truly a shock to everyone here and has had lasting effects on all tenants in our beloved building. Not only did it consume countless tools, bike parts, and our beautiful workspace, but the water and smoke damage crept into nearly every corner of our historic building. 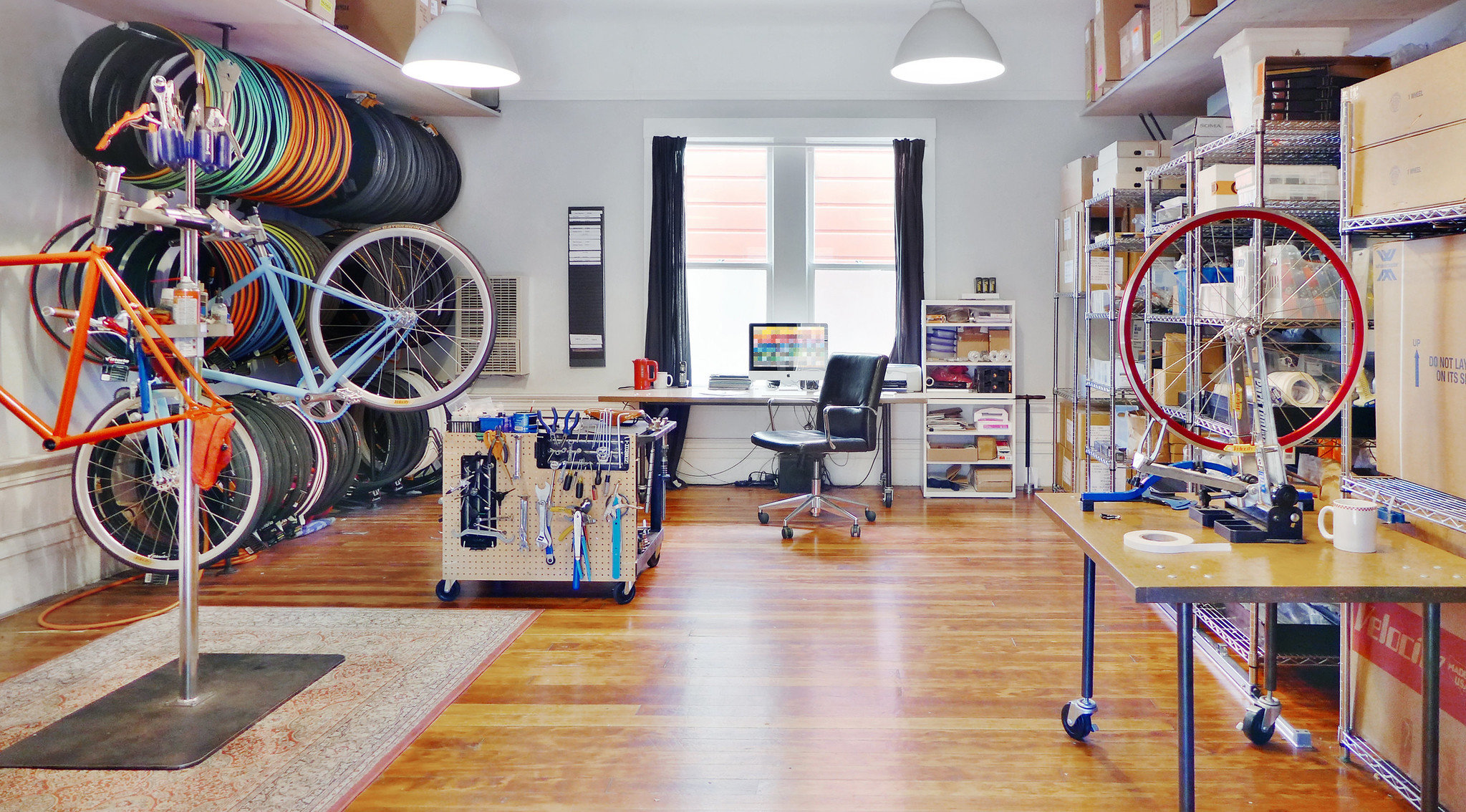 (Above: Mission Bicycle Company's workshop in its former glory)

Nearly three months later, the structural rebuild process is still in its early stages and we are only just starting to catch up with bike builds and orders placed before the fire. The fire, combined with the changing face of retail in the Internet age, has pushed us to rethink what Mission Bicycle Company is and what it will be. It has not been an easy road leading to this decision, but in order to secure a path for the future, extensive changes are necessary.

As of 2/14/2020 Mission Bicycle Company is scaling back its operations so that we can focus on completing all current projects to the best of our abilities, and to retool our business to best position us to fulfill our mission.

What all that means for you, our loyal and amazing customers:

If you have read this far, thanks for reading, we know it’s a lot. This has been an enormous adjustment for us as well, and please bear with us while we make the transition.

While we are pressing “pause” on new orders, we want everyone to know Mission Bicycle Company is not closing its doors. Important things are happening behind the scenes and we fully intend to emerge on the other side with something awesome.

Capturing all our thoughts and emotions in one space is impossible, so we would just like to say, thank you. To the riders. The commuters. The innovators. Our friends. Our colleagues. Our customers. Our neighbors. To the Mission. To San Francisco, the best city in the world. And to anyone who believes that cycling leads to greater things. We would not be here today without all of you. From the bottom of our hearts, thank you. See you soon. 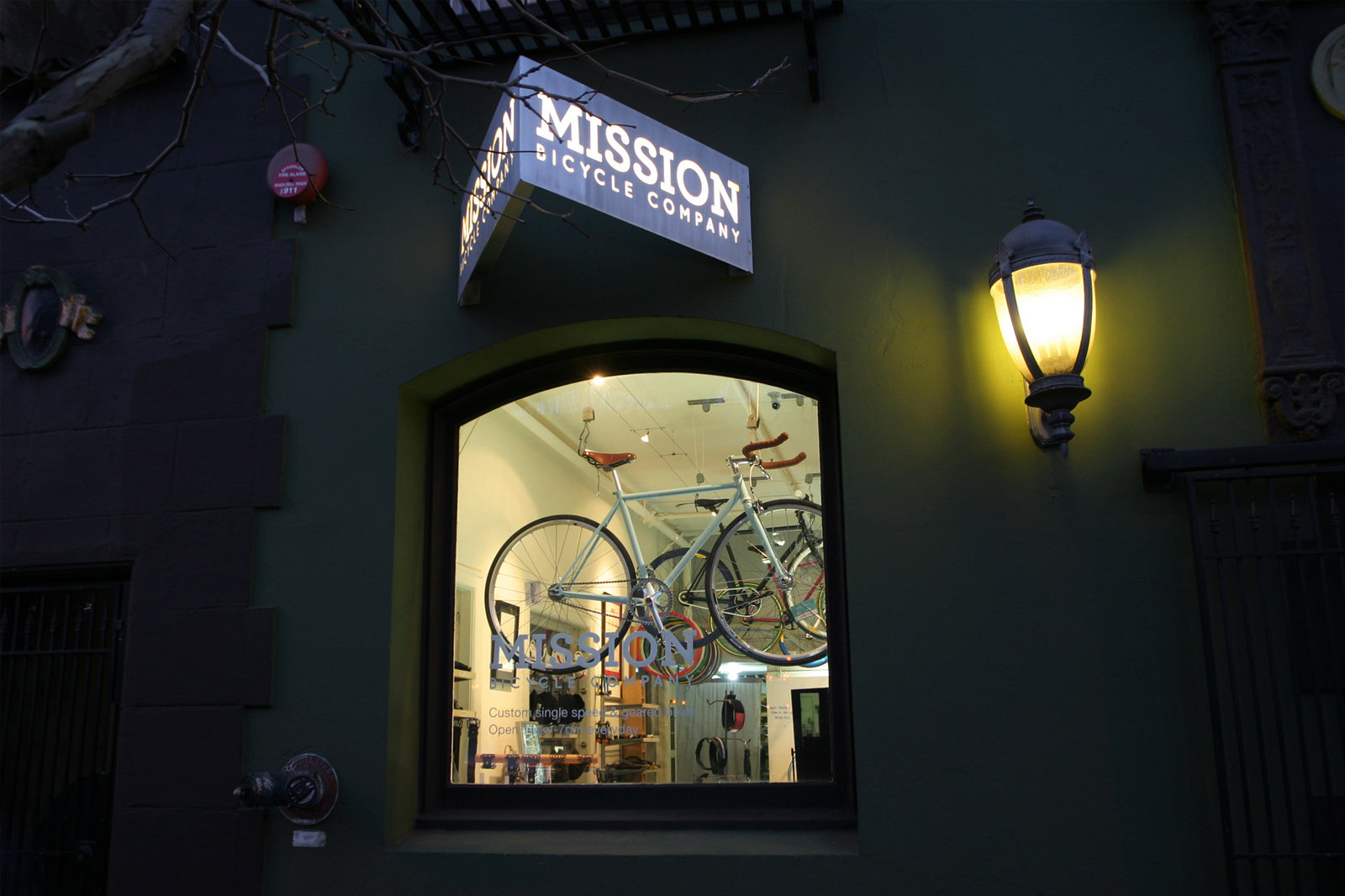 It's been a long cold rainy winter out here in San Francisco, and our Retail Manager, Nick, has been itching to get a group ride together. Well, ladies and gentlemen, it looks like this weekend is our weekend!

This Saturday, April 27th, we'll be meeting at our shop (766 Valencia) at 12:00 noon to kick off our first group ride of the season. The idea is to get a lot of sunshine and see the Big 3 beaches of the city, Ocean, Baker and Crissy Field at a very leisurely pace, making 2 stops for snacks/drinks.

How it's all going down:

Google maps says 2.5 hours riding time, so with additional time for chilling, chatting, and stopping to smell the flowers, maybe 3.5 - 4 hours? No pressure to stay for the entire length of the ride either, this is all about YOU having a good time.
Please, please, please just remember to bring sunscreen and water!
All bikes welcome, all skill levels welcome, all people welcome.
Feel free to reach out to info@missionbicycle with any additional questions you may have before the ride comes up!
Can't wait to see you all Saturday.
April 16, 2019
Mission Crit 6

This Saturday (4/20) the Mission Crit makes it's triumphant return to the neighborhood we’re so lucky to call home. If you've never been before, or are asking yourself what exactly a crit race is, allow us to quote the Mission Crit website...

“Mission Crit is an unsanctioned bicycle criterium held on a short, technical circuit in the Mission District of San Francisco. It is the first race of its kind to win approval from the City of San Francisco. The 40-minute race pits elite road racers, track racers, and bicycle messengers against each other on fixed-gear track bicycles in a fast-paced, high-adrenaline competition.”

Quite simply, it’s our personal favorite neighborhood event of the year, and we’d love it if you came out to show some support alongside the Mission Bicycle staff.

Additionally, with two of our staffers (Nick and JP) racing the event, and the rest of our crew volunteering as event staff for the day, we’ll officially be closing the shop at 766 Valencia for the day of April 20th and resuming the normal store hours the following day. 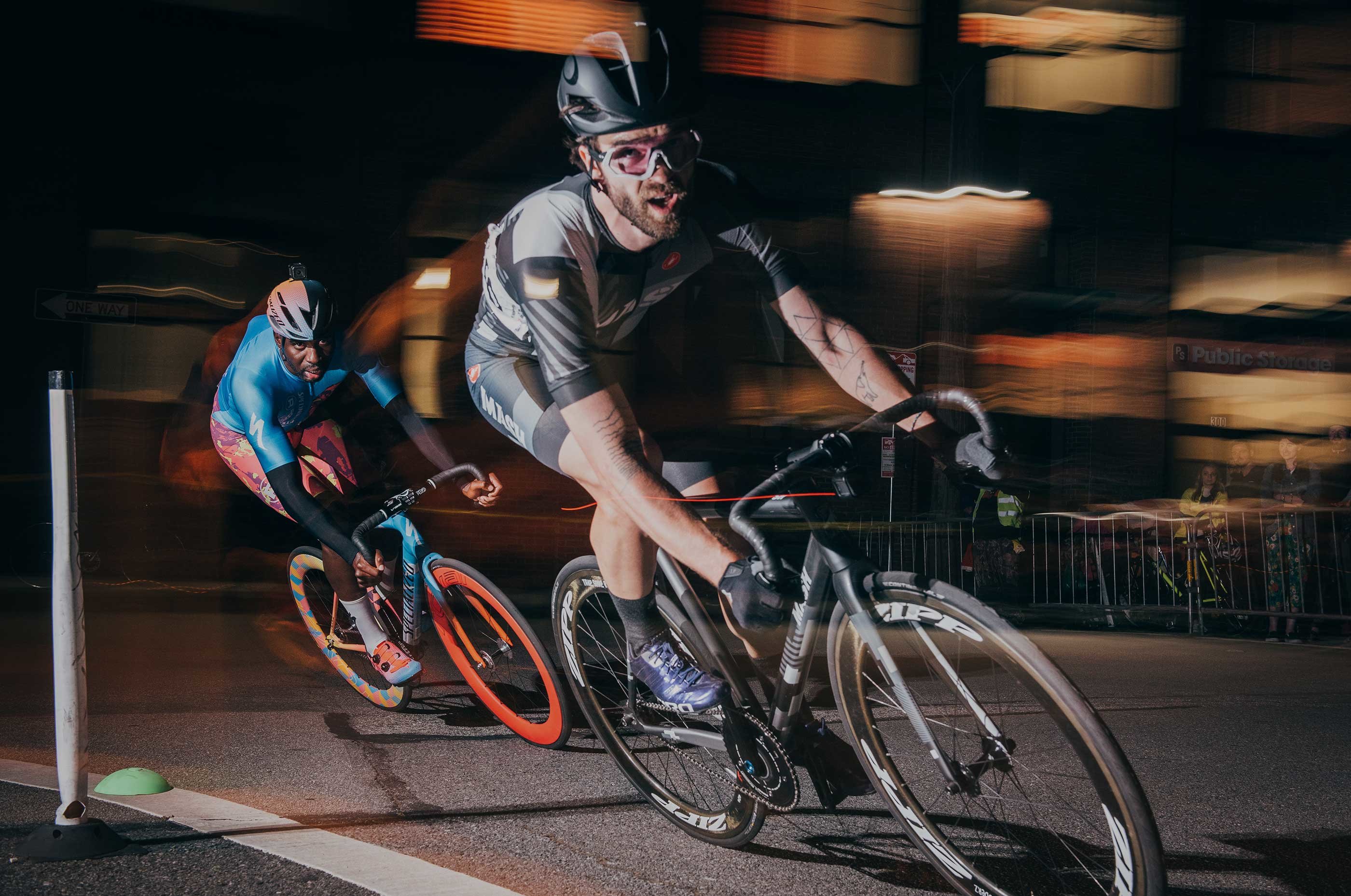 With Mission Crit now in it’s 6th incarnation, things are shaping up to be even more crowd pleasing than ever before.

One super positive and major change to the format of this years event is the deviation from the tradition of putting the men’s main race as the headlining event and instead placing the women’s race center stage to close out an epic night of high-octane bike battling. 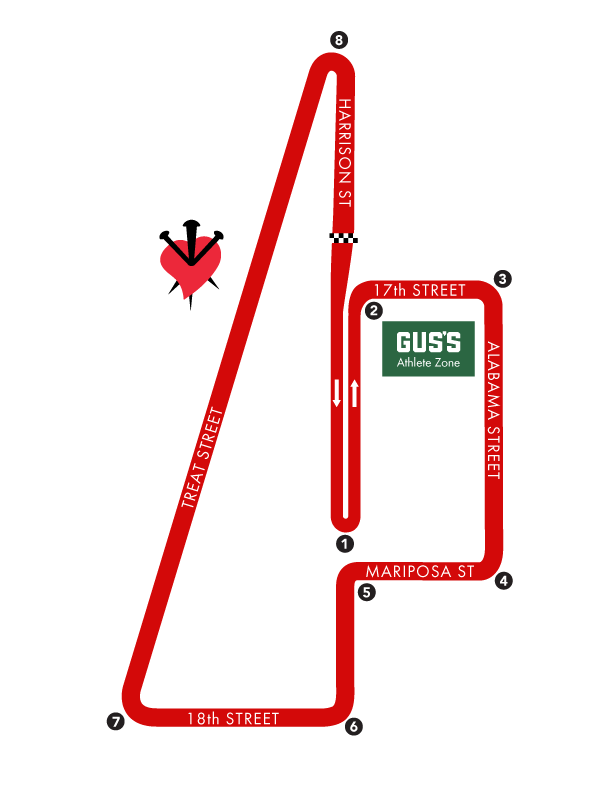 A crowd of around 5,000 is expected to turn out again for this year's race, with over 250 racers from as close as the Mission, and as far away as Europe, the Middle East, and Australia.

If you wanna come out and pre-game the day before, the official kick off party is being hosted at the Pas Normal Studios pop up in Hayes Valley on April 19 from 6pm-10pm.

If you’ll be coming through for the main event, the festivities will officially begin the next day on April 20th, with the following events going down:

After all that, we’ll be headed to the after party, organized by the SFBMA, and once again held at Thee Parkside on 17th Street. Live music, food, and all kinds of refreshments will be going on there from the end of the race until the bar closes at 2:00am. The night's gonna be a doozy from beginning to end, so bring your helmets!

Here in SF, we’re reaching a point in the year where the rain finally seems to be dialing itself back, the sun is teasing us during fleeting hours of the day, and the fog…well the fog sorta just does it’s thing. Which is all a round about way of saying we'll be getting out a lot more often in the coming weeks/months and it's time to check the vital signs on that bike of yours. 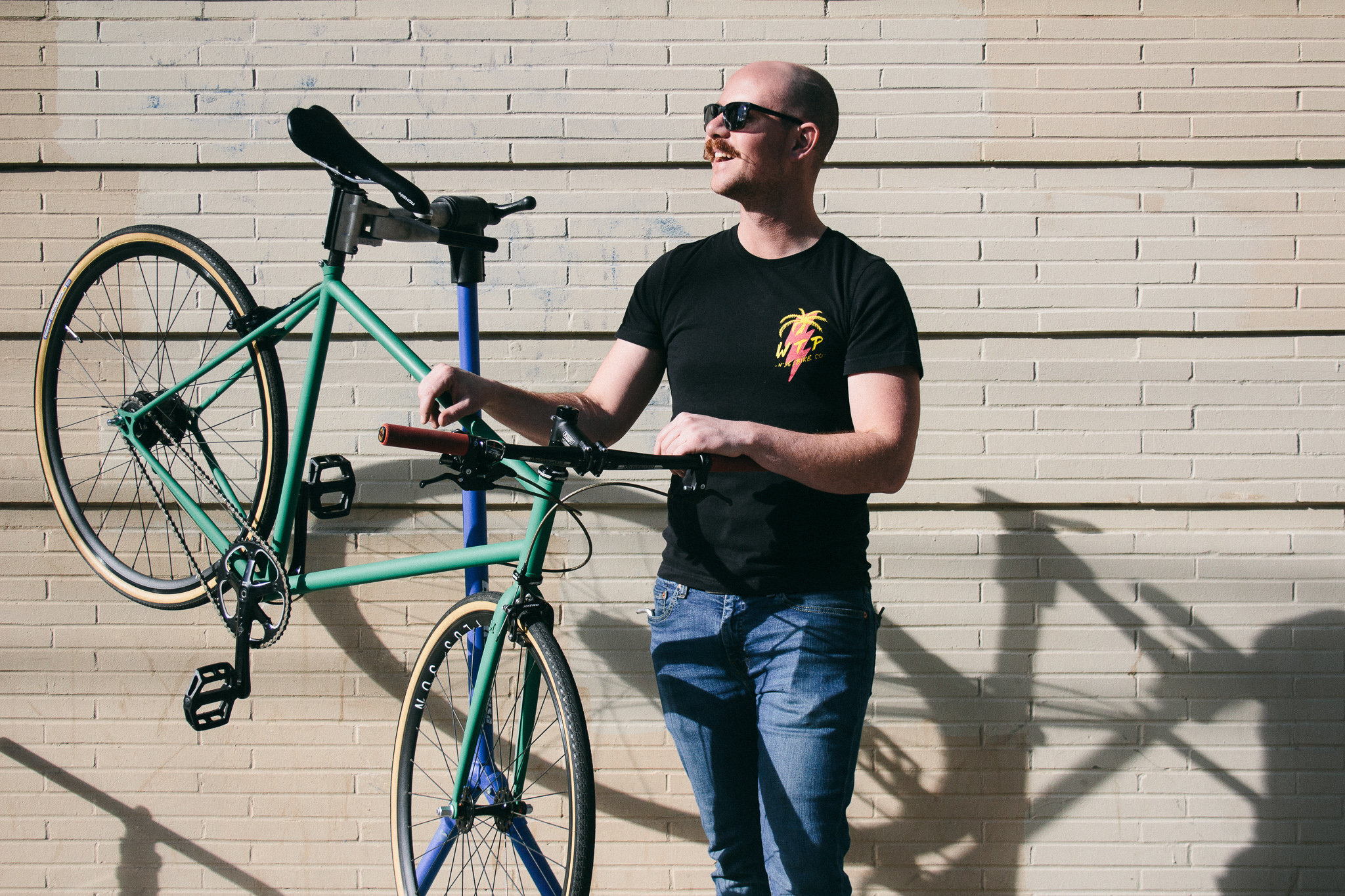 If you’re a fair weather rider, your bike probably collected dust over the winter months and could use a little tune up due to some mild neglect.

On the flip side, if you trucked it through the rain, sleet, and/or snow this winter, we applaud you and know for a fact that your bike is in need of a little love before you get out on some summer rides.

Either way, the “sunny” spring and summer days theoretically aren’t too far off, which means it’s time to make sure your bike’s in tip-top riding shape. The below information is meant to make even the most novice of riders/mechanics feel comfortable with doing some basic maintenance on their trusty set of wheels from the comfort of their own home.

Setting up for maintenance: 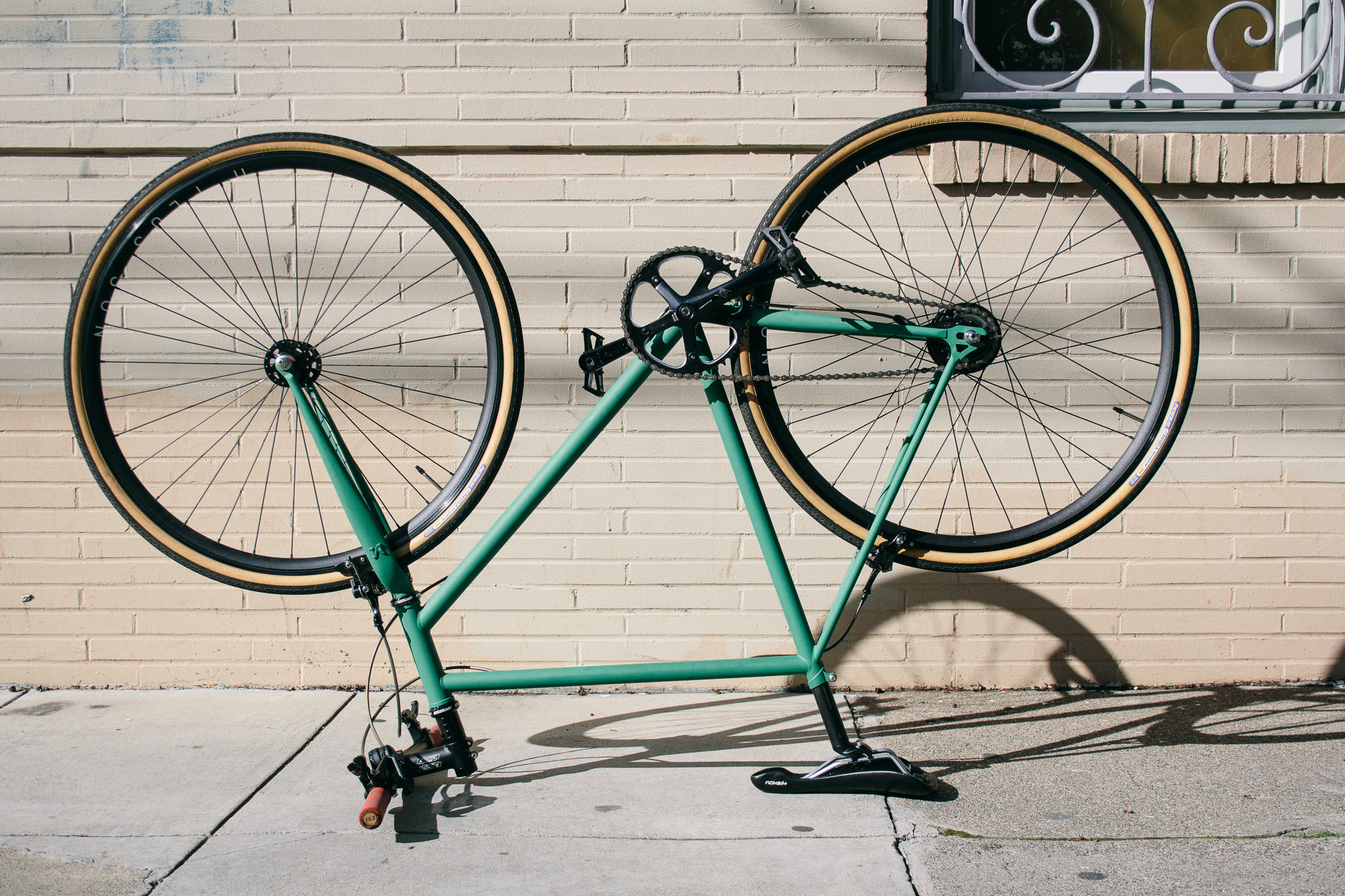 Alright, we know it's highly unlikely that you are one of our few customers that have made the investment in a  full-on bikestand at home like Josh. For the rest of us, we're going to suggest flipping your bike over onto its backside (pictured above) to allow it to remain stable and stationary while getting it's yearly checkup.

So one of the most overlooked and easy to accomplish bits of maintenance comes down to a few common tools and a little grease and/or lube. 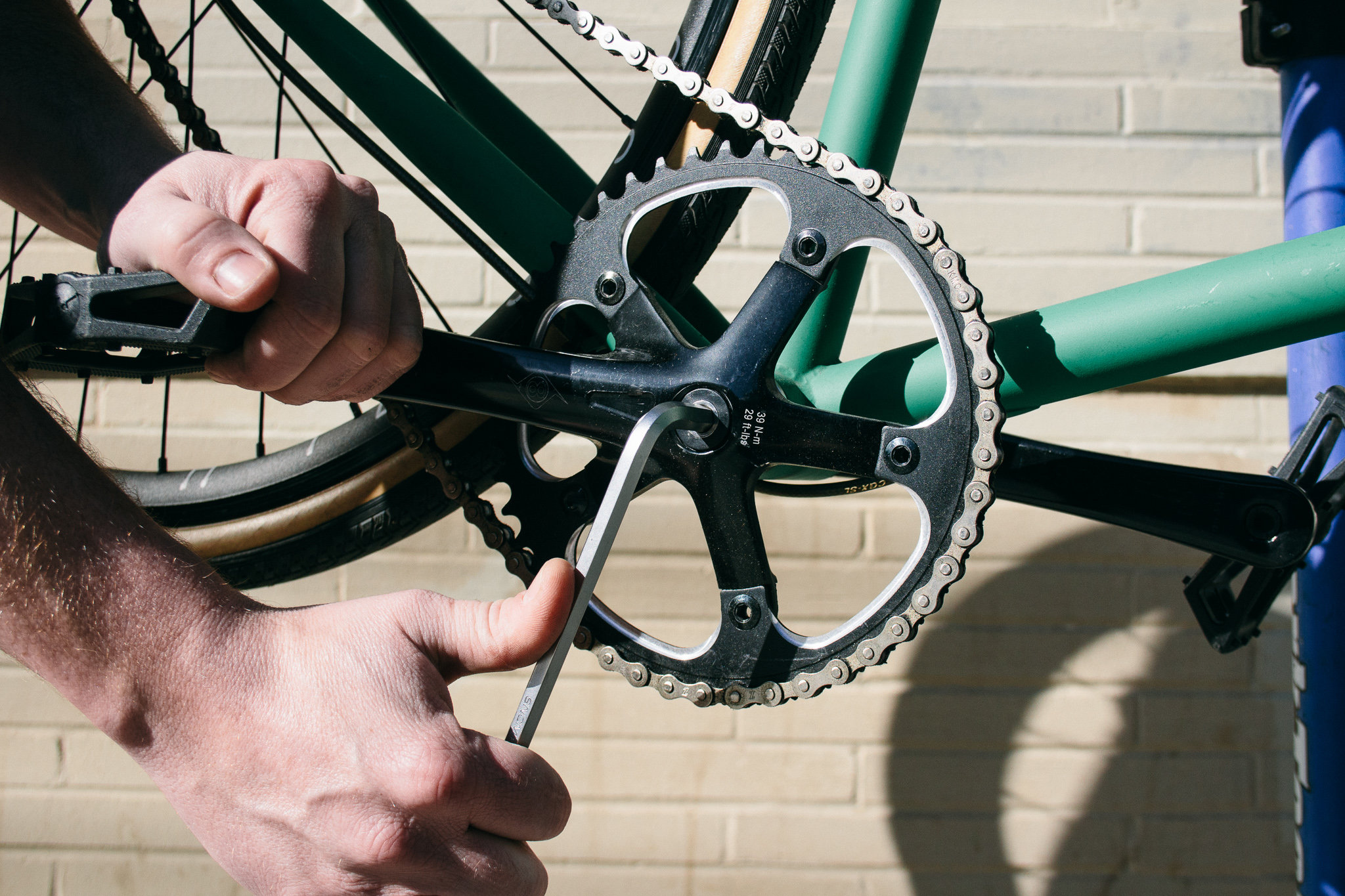 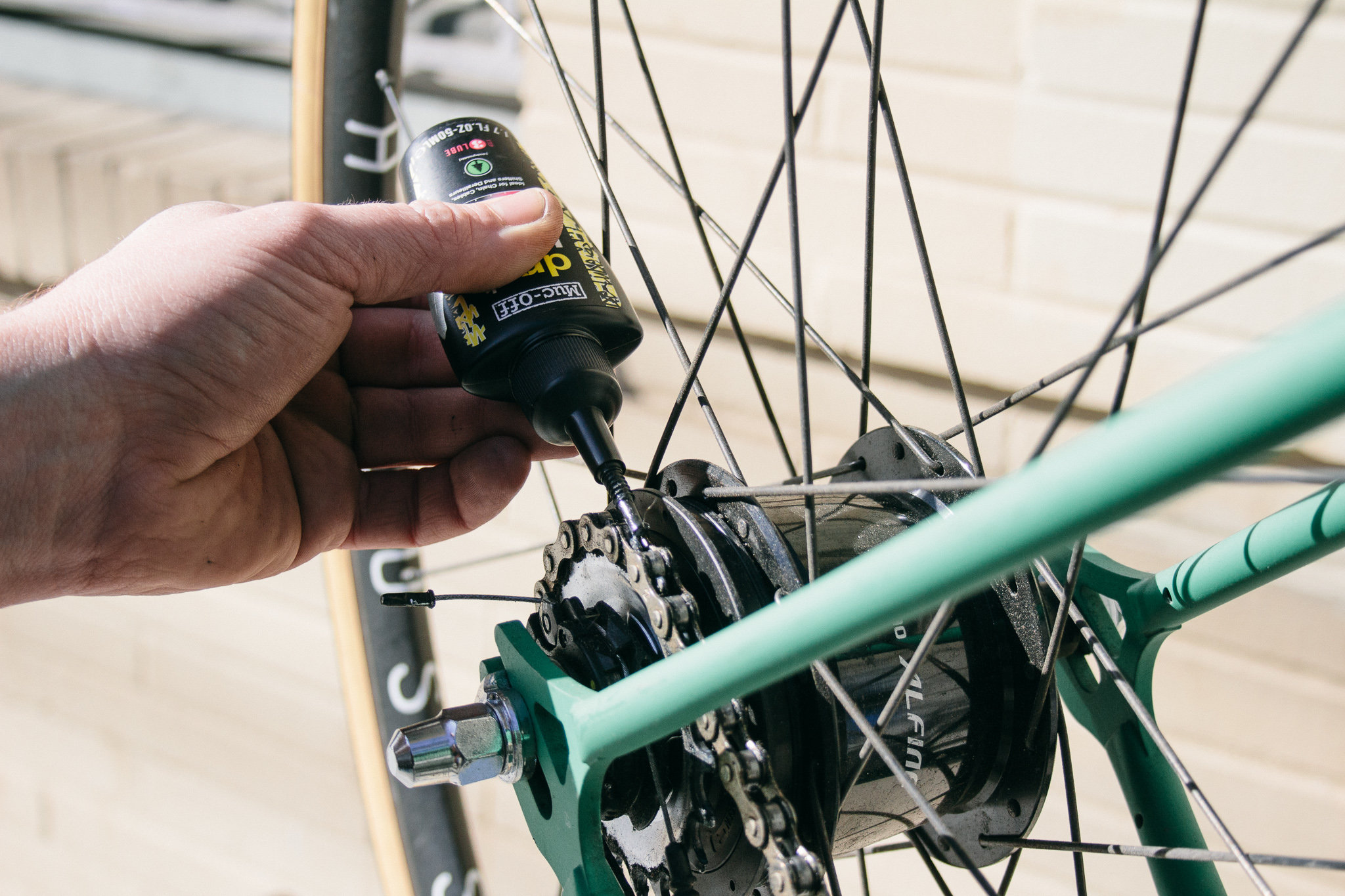 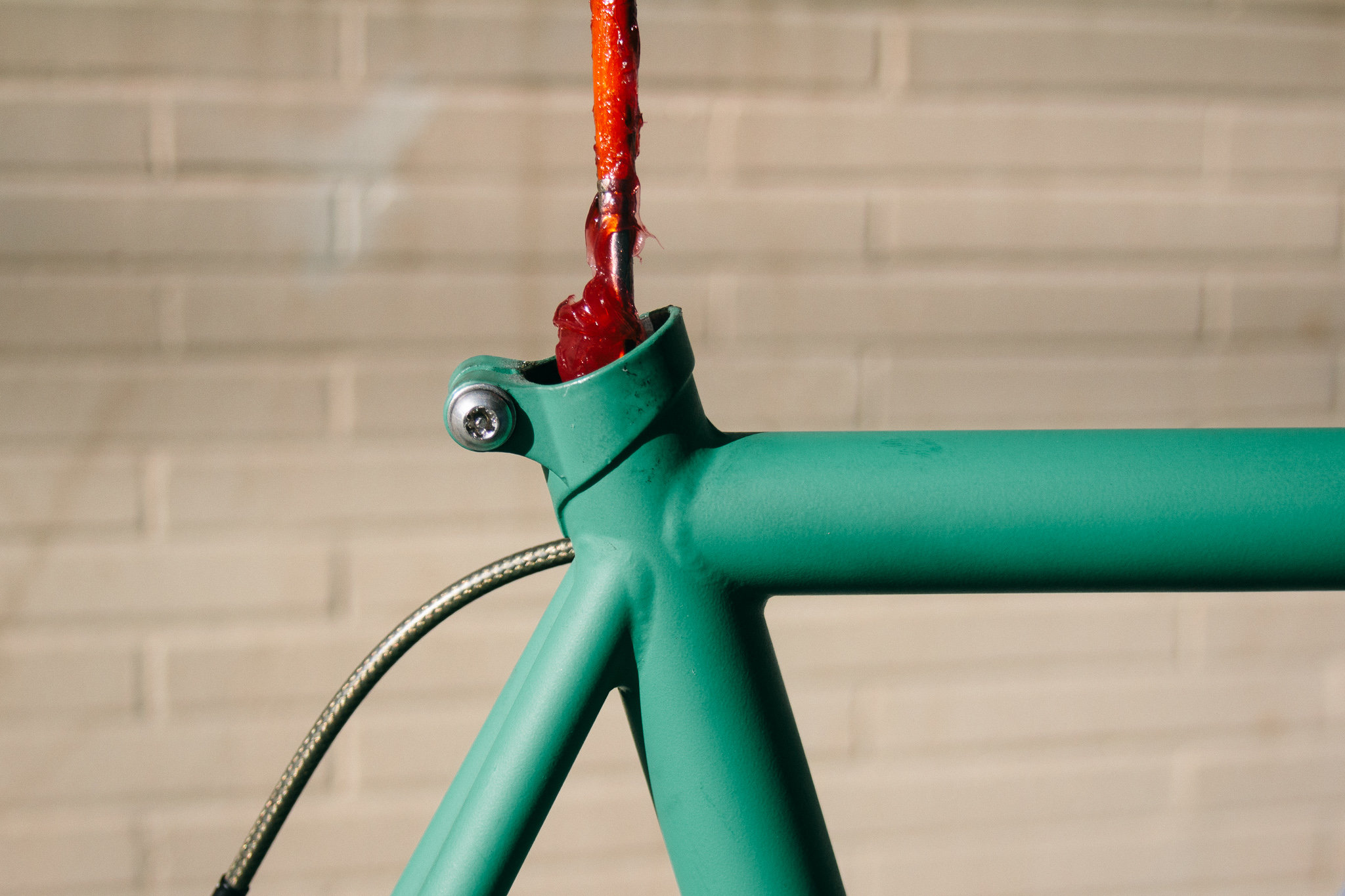 Helpful tools in our shop: 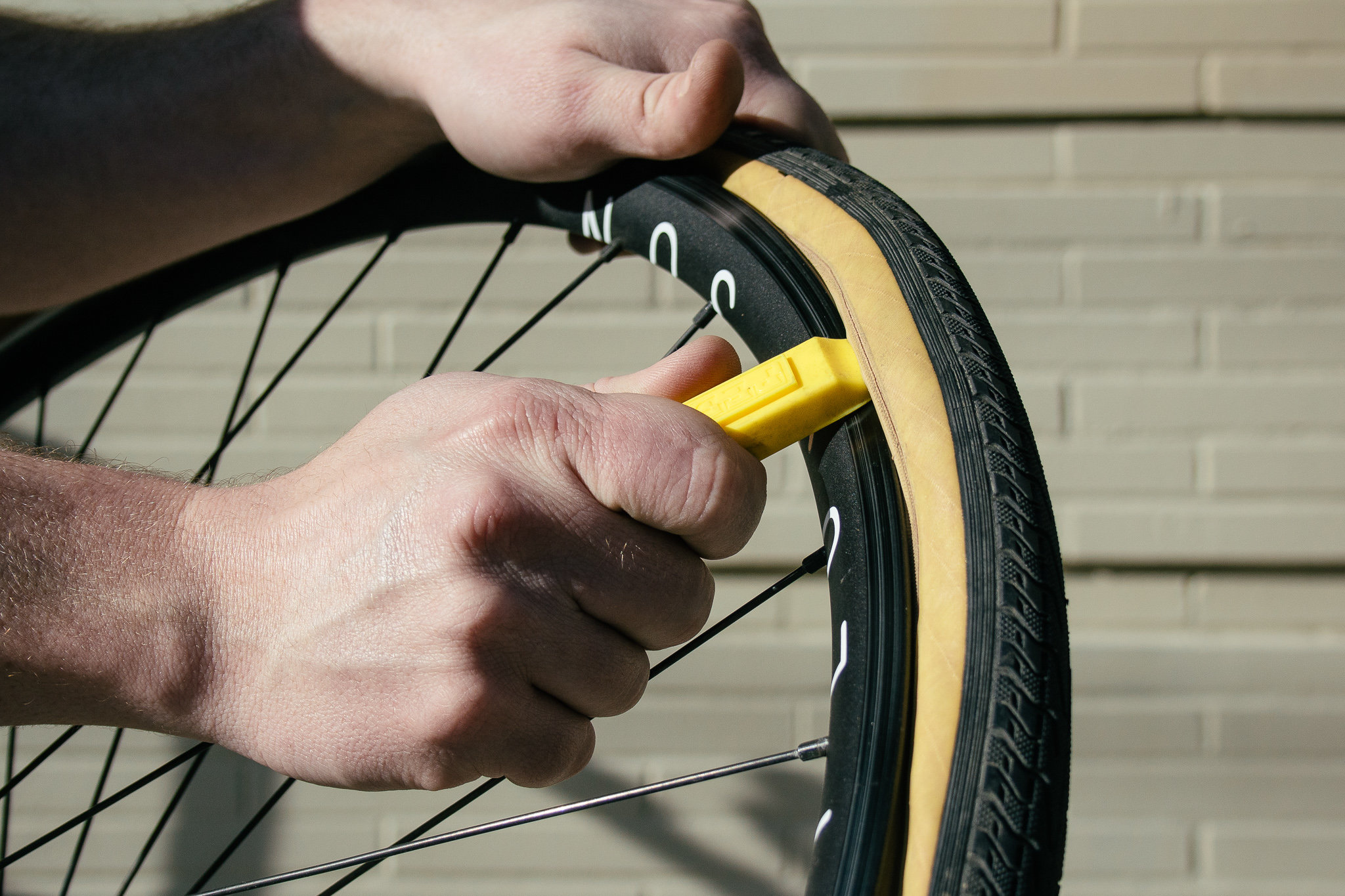 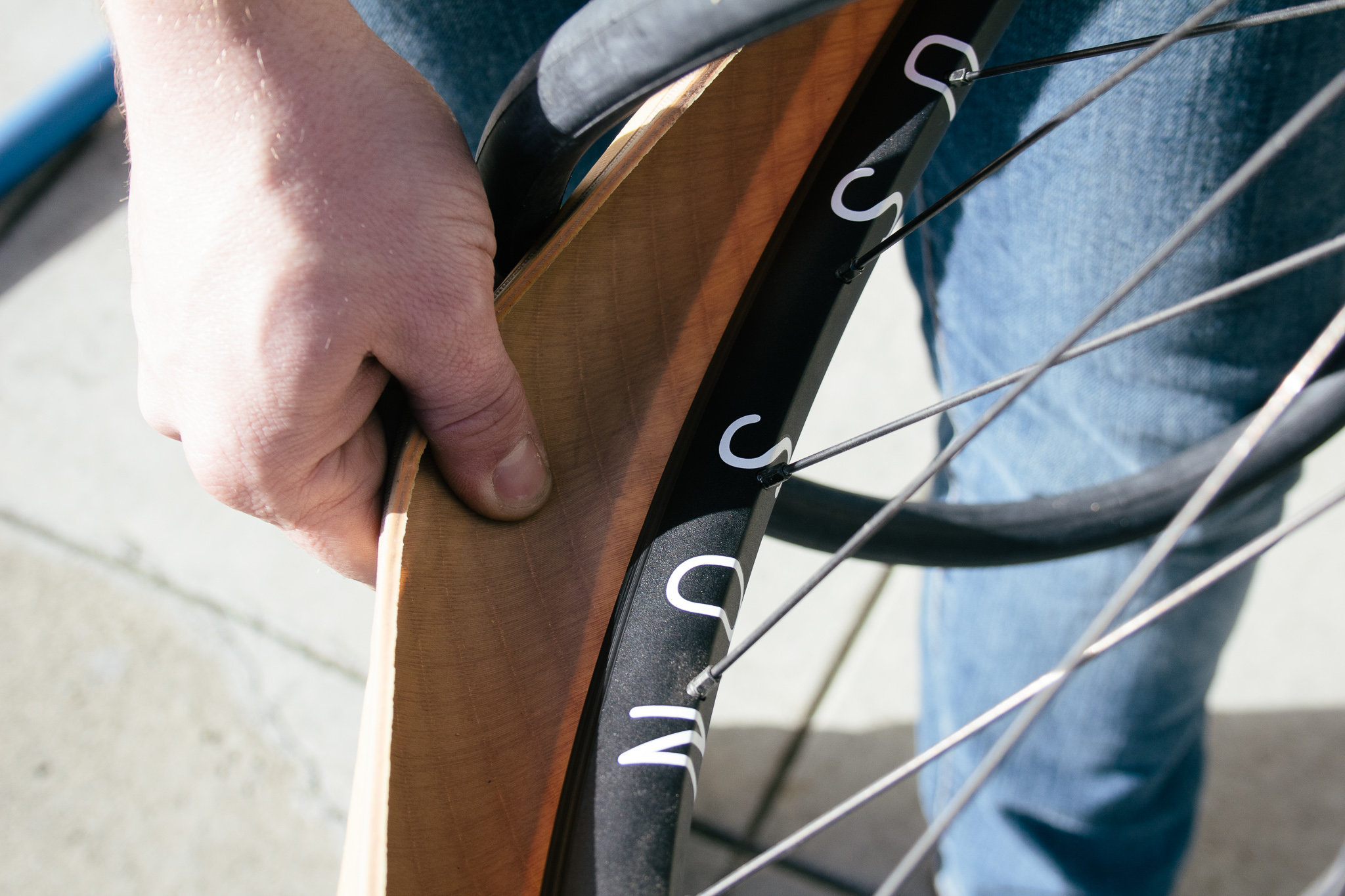 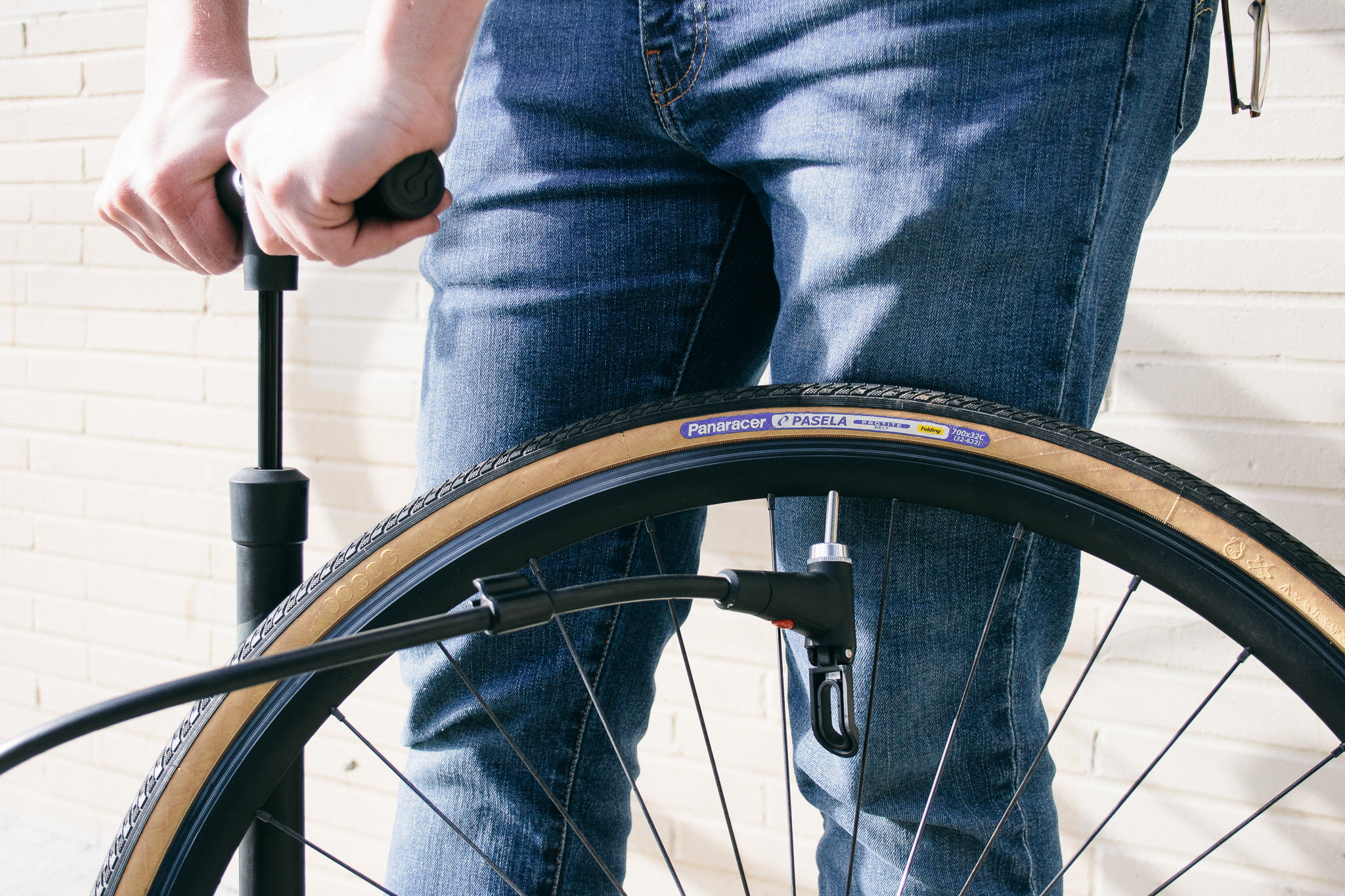 Helpful tools in our shop:

Caliper brakes a little on the loose side? This is another easy at-home fix in many cases.

Tension your chain & tune your gears:

If you’ve opted into riding one of our internally geared bikes, you’re in luck. The Alfine gear tuning adjustment is super easy. All you need to do is the following:

Rolling on a single speed? Check your chain tension and make sure there’s no unnecessary slack. If you do notice that your wheel has shifted forward and is causing chain slack, simply do the following. 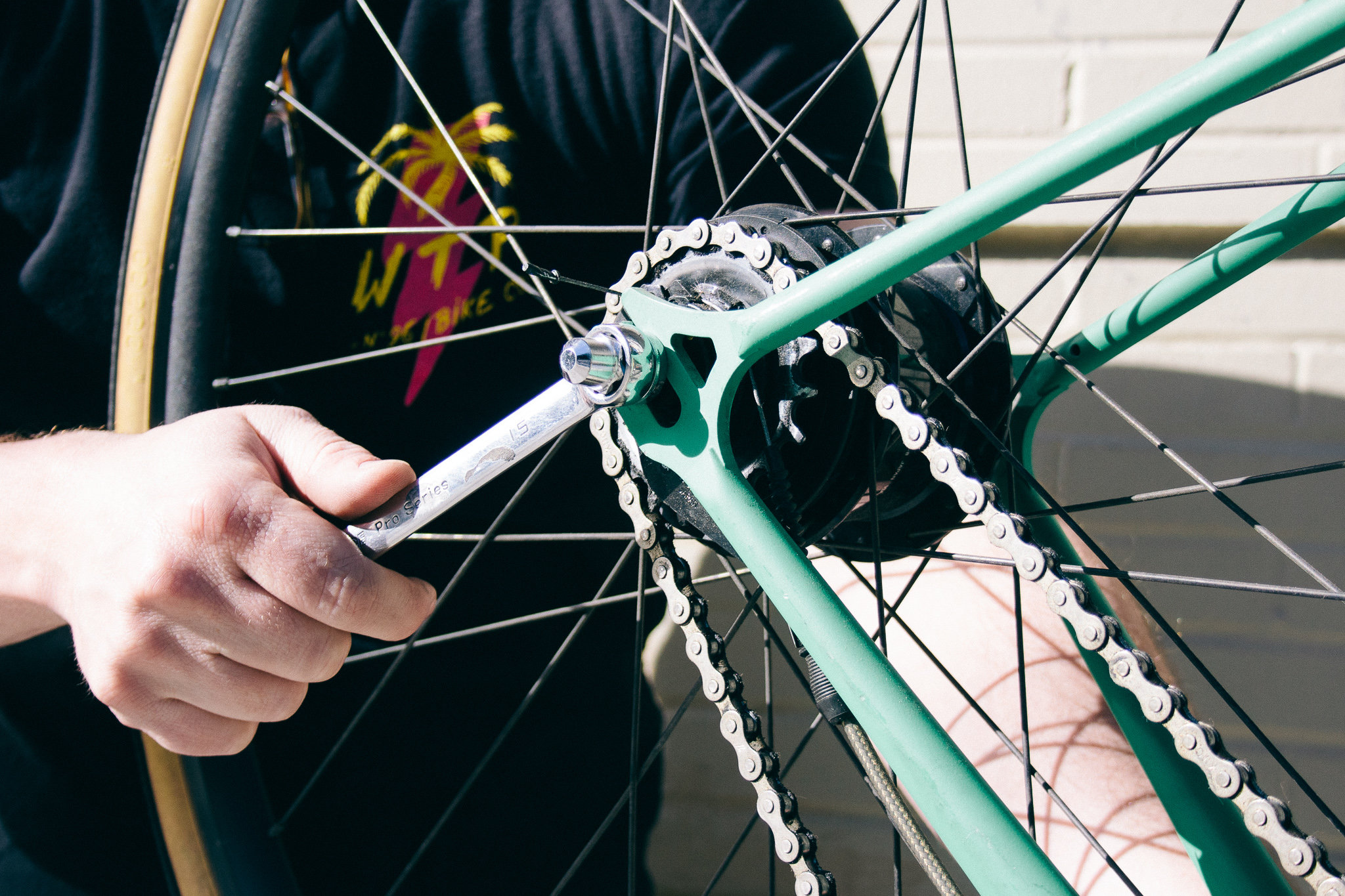 Finally, ride it out: 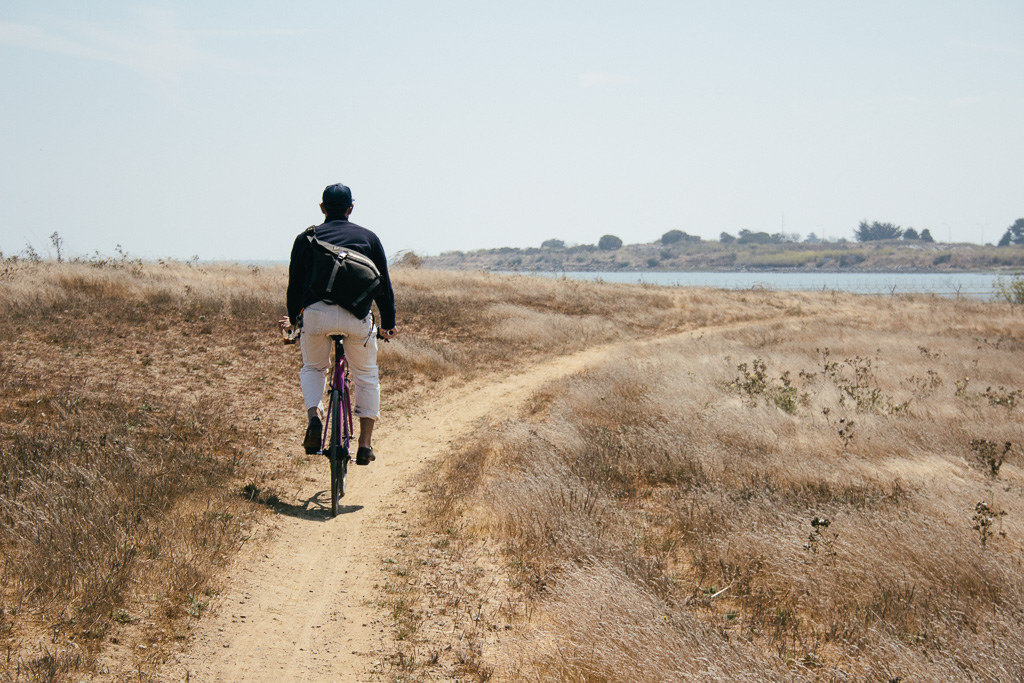 And with that, you’ve (hopefully) successfully prepared your bike for some summer riding. Didn’t break the bank, and hardly broke a sweat. Now the rest is up to the weather man!

If for any reason there’s something going on with your bike that you don’t feel comfortable fixing, don’t panic – we’re here for you. Feel free to reach out to us at the shop and we’ll be happy to help out. To schedule your tune up with the shop, please don’t hesitate to reach out during our normal business hours at (415) 683-6166